Although this site is primarily for modelling, I want to share the airshows I go to as well – after all, why celebrate only the models without the real subjects?

Duxford Imperial War Museum is a large museum in the United Kingdom which has many hangers with aircraft spanning from World War One to the modern era (it also has one with tanks at the far end too). Duxford, though, is an active museum – with many different aircraft being restored, maintained, and flown through various organisations/companies. This makes Duxford a perfect environment for an airshow mirroring it’s variety.
For the flow of the article, I am going to be showing only one photo for each display in the article – at the bottom of the article you will be able to see a slideshow (with link) to my Flickr for a full set of photos.

The airshow itself started just after midday, and opening at 10am. I went on the Saturday, which had perfect weather (with a small shower in the morning). I spent the first few hours exploring the museum’s hangers again – as it’s only a small journey from my home, I have been a number of times previously. The museums exhibits are kept in lovely condition and the airshow meant there were some extra interactive parts. There was a science show for children which I found especially pleasant.

The show started with the OV-10 Bronco from Belgium. I cannot remember seeing this before (though my father assures me many moons ago I had seen it). Either way, this was a really pleasant start to the show. The aircraft had a striking paint scheme with ‘Lest we forget’ on the top of the wing, and poppies covering the bottom. The aircraft put on an impressive display showing the aircrafts legacy and relevance today.

The next display was meant to be the RAF parachute team, the Falcons. Due to pretty strong wind conditions it meant that the team could not jump. Instead, they landed in good spirits and walked around the ground. It did give a nice up close look of the Skyvan when landing however.

The first loud and fast act of the show was the Eurofighter EF-2000/Typhoon. This aircraft came from the RAF and put on a stunning and tight routine for the 2017 circuit. The ceiling for the show was great, so the pilot was able to do it’s full display, showing the incredible agility and manoeuvrability of their steed. It is an aircraft I’ve seen many times and never tire of seeing the new routines each year.

The Brietling Wing Walkers were a great contrast as a follow up act. They flew in a 2 ship formation for this show, which was a nice change to when I normally see them in their full fleet at other shows. I grew up with this team (who at the time were sponsored by Utterly Butterly, and then by Crunchie – a chocolate bar in the UK) so I am always delighted to see them. The commentary was enthusiastically delivered, and the women on the top of the aircraft displayed incredibly. I am ever so glad that these guys are still going so strong.

American influence at Duxford is apparent by the United States Airfoce hanger in the museum. Two aircraft formed the next part of the day. One of the aircraft here is famous for it’s role in the film Memphious Bell. The aircraft is still flying today as Europes only airworthy B-17 Flying Fortress. Alongside it was it’s ‘little buddy’ the P-51 Mustang. The display was a grand reminder of the tragedy and loss during the Second World War, with a salute to those lost in the shape of smoke trailing from one engine. The P-51 then followed with it’s own highly energetic display, showing it’s graceful lines and dominating prescence.

An autogiro is genuinely not something I have seen at an airshow before, but was a pleasant surprise. The pilot had no fear of being beautifully brutal with his handling of the aircraft, throwing it around and demonstrating it’s insane capability.

This was followed by an Apache from the Army Air Corps of the United Kingdom. The Apache is well known on the British airshow circuit for featuring explosives and doing a role demonstrataion of attacking an enemy incursion. This show was no different, featuring a movie-like display. It helps give some real depth and context to what the helicopter is actually capable of. There was a shorter display after this just showing how flexible the helicopter is.

The Red Arrows did not make an appearance at Duxford this year, but some of it’s former pilots did in the shape of the Blades. The team fly Extra 300s and are a civilian aerobatic team (which as you probably will have seen are registered as an airline meaning that you can get flights with them! The team handled the high winds beautifully, and were able to show precision aerobatics wonderfully.

The next act was one which I was very much looking forward to. This was a team made up of a Jet Provost and Strikemaster. These were training and light strike aircraft respectively, but both based on the same airframe with their Viper power plants. I’ve always loved this aircraft, and had a great amount of jealously that my father has had flights in them.  I have seen these preform independently before, but never together, and I took much joy in seeing them together.

Following up this beautiful duo was a trio of aircraft. Two Mewgulls and a DH Comet. These aircraft have legacies in their racing and record setting, and are some of the most famous aircraft of the inter-war years. There was also a DH Dragonfly which flew afterwards, again, a famous aircraft from the period.

The interwar years continued for the next act, a DHC-2 and Nord Norseman. Both aircraft are bush aircraft; designed to handle the rough terrain and harsh environments of Northern Canada. These are recognisable aircraft that saw many configurations, with skis, floats, and traditional landing gear. The Norseman comes from the Norwegian Spitfire Foundation, so wears the markings of the RNoAF.

Two Pitts Specials took to the air immediately after the two old birds had landed, punching straight into their display. This pair were a great contrast to the Breitling Team’s aircraft, as this team had a hyperactive display with rediculous manouverability and great interaction with each other.

The PBY Catalina took centre stage afterwards. It’s wingspan dominated the skies above Cambridgeshire, and it’s engines filled the air with a pleasant hum. This is another aircraft that I’ve seen a few times before, but it’s such a beautiful aircraft that i relish the opportunity to see it twist in the skies. The aircraft also did a few passes with floats and/or landing gear down, which helped show it;’s distinguished profile.

Another Naval star stole the attention of everyone observer next. Flying in was the Sea Vixen. An aircraft with a distinguished shape and noise, the Sea Vixen is a rarity in British skies. The aircraft and it’s pilot, however, were not shy, and packed an awesome show of the aircrafts former power and capability. It was thrilled to be able to see this iconic aircraft once more, and I hope to see it again in the not so distant future.

Update: It appears that unfortunately the Sea Vixen was forced to do a gear up landing returning to Yeovelton. This is a great shame and sadly means that it will likely be out of action for some time. Fortunately, the pilot was uninjured and walked away from the incident – which is the most important part.

The act I was most looking forward to, however, was the Rafale. Firstly, I adore the Rafales design. Secondly, the aircraft has an incredibly sexy paint scheme this year. I always find the French have great creativity in their displays, with enough variety each year to keep them continuely entertaining. The aircraft was handled beautifully, and put on a great display before returning to Cambridge Airport to ready for it’s display on Sunday.

The ultra-modern omifigher was followed by one of the earliest mass produced jets – a Mig-15. Again visiting from Norway, this is another aircraft with grand history behind it (including the first jet-to-jet kill over Korea). It is a photogenic aircraft which was very pleasant to watch with it’s clean smooth lines in the clean empty skies.

What was to be the closing act (wind dependent) was the Spitfire duo. A pair of the world renouned Supermarine Spitfires took to the air over their home in Duxford. The roar of their iconic Merlin engines made everyone stop in awe.

The Great War Display Team managed tog et airborne at the end of the day. They were meant to preform a lot earlier, but were unable to due to the wind. Luckily this had resolved by the end of f the day and they managed to put on their dogfighting circus in the sky.

Below is a slideshow of my photos from the day, if you ever have the opertunity to go I strongly recommend this show. It’s especially great because of the historical variety of aircraft at the show. 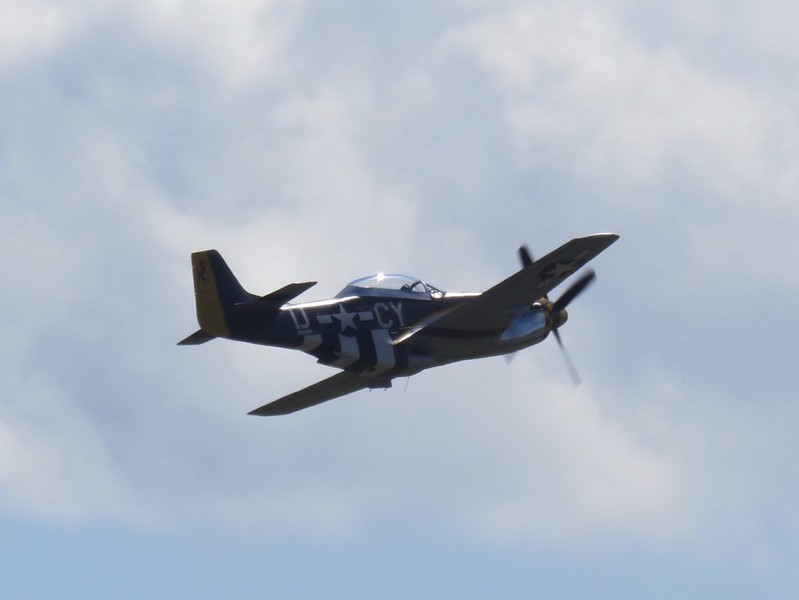