The IAR 99 Soim is the primary jet trainer of the Romanian Air Force (Forţele Aeriene Române). It was designed and built by Avioane Craiova- the Romanian aircraft manufacturer. About 20 are in current service and a new model is being designed for first flight later this year.

Perhaps understandably the aircraft isn’t one that has attracted larger model companies. It is an aircraft that is rarely seen in real life in the West (and I’d imagine a fair few would not know the aircraft for that reason). It fell on the smaller  companies to release this gem to modellers and Lift Here took up that challenge.

The kit itself is resin. The parts come separated in single pockets of the plastic packaging. The parts are in sections that would make sense – so that you can easily assemble the model. I firmly believe you could assemble it even if you didn’t have the limited instructions that come with this kit.

The parts themselves have realistic detail on. The panel lining doesn’t look too deep but show through undercoating and paint wonderfully. They add a good amount of depth to the model. The parts themselves are well formed. Like all resin their is excess that needs sanding from around the kit, and thickness – the backing – that needs cutting from ‘behind’ pats. I only had one error on my kit – one of the cockpit panels feel apart but it is only a small part and I am going to cover up with plasticard.

Another note on the parts is that you get the vacuform canopy, and a ‘master’ too. So, if one wanted to, another canopy can be made – which makes the bushiness of creating an open canopy a little less daunting.

The decals are pretty small but allow for one to make an of the current aircraft that are in service. One can also make the display aircraft that is used to show the types potential in it’s fetching Romanian colours.

Construction of the kit is pretty straight forward. My first step was to remove all parts from packaging. I actually dry fitted the fuselage halves and then dry fitted the wings. This looked pretty decent, so I proceeded to remove excess resin from the wing-fuselage joint on the wing parts. I then used epoxy resin glue to attach them, being careful to adjust to keep them level. Then I assembled the cockpit. As mentioned, one part broke but it fit together well (though I have on seat at a slight angle that needs adjustment).

After that, it was straight forward – glue in the cockpit, bond the fuselage halves, add the exhaust pipe, tail sections, and if required landing gear. Finally, two small parts were the air intakes and the wing pylons. 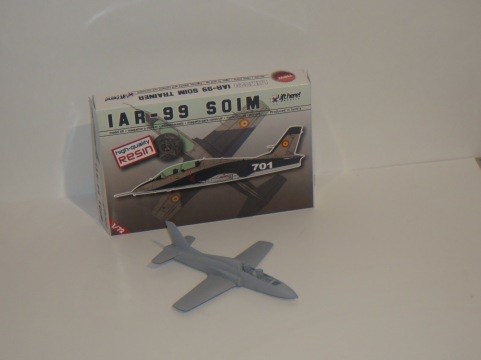 Overall I’d say this kit was really simple. The extra resin was – on the whole – easy to remove and the end kit looks like a brilliant representation of this Romanian beauty. I’d recommend this kit to more advanced modellers (skill wise, not in terms of painting skills) purely as resin isn’t the friendliest. But for it’s cost – if you’re looking for an interesting kit for your first ever resin kit, I’d suggest this.