Kuld be avoided completely; but the new Zvezda molds are the best in my opinion.

Thankfully, with the new technologies and engineering used by model kit manufacturers recently, we now have a wide selection to choose from, like the classic aircraft from the cold war, or the more modern versions of the new millennia, such as the SU-30MK and SU-35S.

In this review, I am going to review Trumpeter’s kit for the SU-27S, the first production model of the Flanker.

The text on the box mentions it’s the “early type” (T-10P production models), which has many differences from the later models of the same aircraft. The box is sturdy and will keep the model safe at anytime. Speaking of the box, the art depicts a rather infamous event from September 13th, 1987, when “red 36” intercepted a Norwegian P-3 Orion; when making a close pass, the Flanker’s port vertical stabilizer came in contact with the Orion’s far right engine. Luckily, both aircraft returned safely to their bases.

As is standard now for Trumpeter models, the interior has a division that separates the main sprues from smaller, and more delicate ones, from the rest. The sprues come packed in plastic bags and some even come with extra foam protection. The whole contents of the box comes neatly packed. 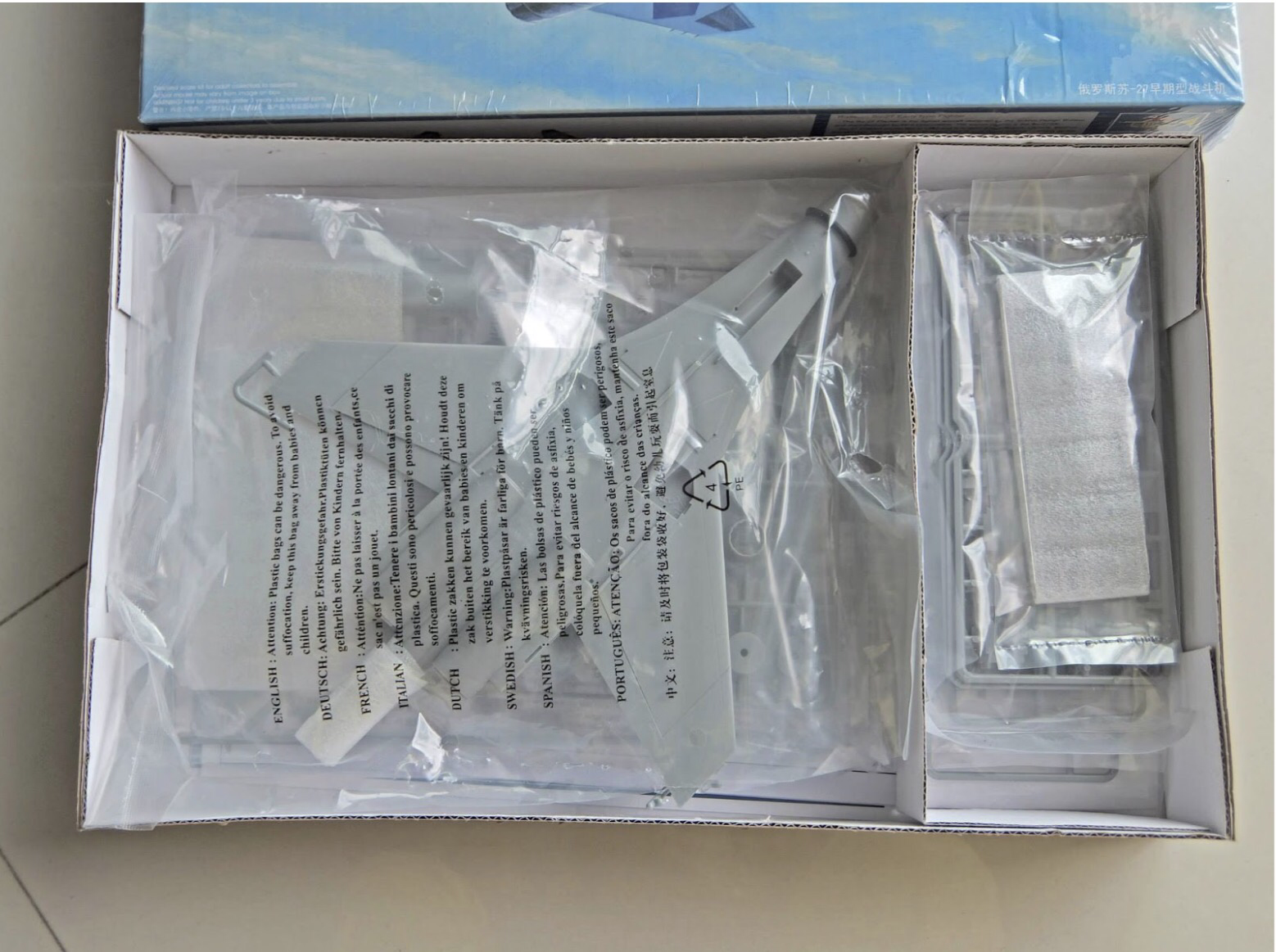 The main body of the SU-27 comes molded in two halves and held tightly with a large rubber ring on the front and some foam on the tail. It’s worthy to note how only a little piece of sprue is attached to the wing. The detail on the fuselage is very pleasant, and the recessed panel lines are very accurate. However, I think they exaggerated a bit on the rivet count and the deepness of the panel lines for this scale (but I will probably fix itself once the paint is applied).

The tail boom of the early SU-27 is very different from later production versions. The side extensions are shorter and thinner. Notice the antenna molded on top, which is why it needed protection. It can be replaced by photoetched metal parts for a more accurate representation. Excellent detail on the lower side of the fuselage.

The antennae on the lower side of the front fuselage is also correct for this early version. It is a plus that these come molded, but you have got to be careful when manipulating the model once it’s ready for painting, since they can quite easily break off. This is why I prefer them to be molded apart from the fuselage and glue them on later, but it’s a matter of taste.

The ejections seats. I guess they come in pairs for the two-seater versions of the aircraft. They come molded in one piece, which is nice and they have awesome detail. It only needs maybe a few more pieces to be complete.

The ‘A’ sprue shows the cockpit, which lacks any detail at all. The panel instruments have to be represented by decals; I find it strange that with all the detail in this model, they decided not to mold the panel instruments, like the Hasegawa SU-33 kit did. The main landing gear is also there, which has the wrong mudguard for the early type. The early type has three vents along the side. The old Hasegawa kit comes with this kind of mudguard, might be a suitable donor.

The kit comes with two options for the main control panel. The right one is obviously for modern versions (probably the SU-35S or modernized SU-27SM, which Trumpeter hasn’t announced yet). The horizontal main stabilizers are perfect, with the rivets clearly represented (which most kits don’t do, even with newer ones).

The ‘B’ sprue has the main intakes and exhaust pieces, as well as the nose radome and some antennae. The exhaust nozzles have the correct shape! No need really for resin substitutes, but if you want even more detail on them, I suggest the Aires ones. The intake grills on the left, which can be replaced by photo-etched ones (if they are to be represented in the extended position); stationed aircraft usually show them flat, so no need to use them. The intake vents on the right are completely wrong. The vents have only 12 slats, and these show double the pieces. For a true lay accurate model these must be replaced (you can use vents from other models that come with two pairs, like the Hasegawa SU-33). Of course, this depends on if you love the aircraft as much as I do or if you’re just looking for a causal build. The kit comes with two sets of vertical stabilizers. The fins for the early version are the left ones, which had “anti-flutter” counterweights at the front (only seen in the very first production models), but if you feel like building a more modern version you can use the ones on the right. Trumpeter packed three sprues of ordnance, which include two versions of R-27 missiles (12 in total) and six R-73 short range missiles; more than enough to arm your SU-27 to the teeth!

It also comes with a sprue with all the wing pylons, and a couple of L-500-S “Sorbtsiya” ECM pods as an extra! They can’t be used on the early version as of yet, but it’s a nice addition for future versions of the aircraft.

The clear parts come protected with foam, which is great because they are not damaged whatsoever! The canopy parts are crystal clear and don’t have a middle seam caused by the molding process, which is also a plus.

Trumpeter likes to pack their kits with a lot of paper, which seems a bit too much to me. I however appreciate they include colored painting and decal guide sheets, which look very fancy.

The four decal sheets are crisp, printed in good quality paper. Hopefully they will apply great as well. You can see everything comes separate (main markings and numbers, panel instruments, data stencil for aircraft and for weaponry, which is very nice since most manufacturers don’t offer data stencil for missiles).

It offers decals for two different aircraft, the aforementioned Red 36 and Red 83. It should be noted that the painting guide for Red 36 suggests using dark grey for the radome and other radiotransparent parts, which is also wrong; it has to be painted the usual medium green seen in most soviet aircraft at the time.

Colour registration is on point, and has enough data stencils for this aircraft. Notice the black decal for the spine’s radiotransparent panel, which has to be green, so this decal shouldn’t be used.

Overall, this Trumpeter kit has excellent quality throughout: crisp mold lines, accurate shape and a great amount of ordnance to build a mean-looking Flanker; with the exception of a few details that should be corrected, this kit is absolutely recommended to build an early type SU-27. I suggest using photo-etched pieces to improve on the accuracy of the model – Dream Model released the only specific set that is pretty good, but you may adapt Eduard’s SU-27 Flanker set, which comes with self-adhesive and pre-painted pieces to make your job easier.

This article was written by Larissa Guzmán Martínez